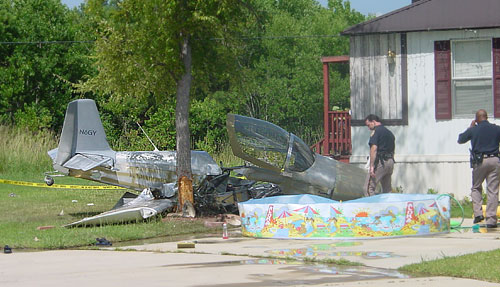 Contrary to local Houston news reports today, I have NOT slipped into critical condition but am home and doing well, all things considered. Physically I'm probably better than I have any right to be. I've got 2 broken ribs, a wrenched knee, a bunch of cuts and gouges, am awfully sore and not moving too well. But overall, I'm just damn glad to be alive. When you see pictures of the cockpit you'll understand just how lucky I was to walk away. I only have a couple pictures from my camera before the batteries ran out but I'll post them (HoustonRVBuilders group on Yahoo) and others when I get them from friends.

The other news reports on the crash were surprisingly accurate. Around 3:30pm on Thursday I departed on the maiden flight of my new RV-6 from DWH. I headed west toward Hempstead and Brenham for handling and systems checks. For 30 minutes I had a glorious flight and was the happiest man in the air. Returning to Hooks, when I turned on the boost pump the engine went rough. After trying various combinations of boost on/off and leaning I thought the engine was running smooth and planned for a high speed approach. On a close base I went to add power but the engine was dead and just windmilling (C/S so I had no rpm indication of a problem). I went through a quick restart drill and assessed my options. There was nothing but trees between me and the runway and I wasn't going to make the runway. The other way was a trailer park, a thin row of trees and a pasture beyond that. My decent rate ruled out the pasture so I went for the trailer park. I hoped to put it down on the street and roll/slide between two trailers and into the trees beyond.

It almost worked as planned. Based on what memory I have and track marks I found, I hit in the street but was headed for one of the trailers. I jammed full left rudder (broke the stop and punctured the rudder with the elevator) to change direction. That worked but then I hit a 6" dia. tree in front of the trailer. It hit dead center in the right fuel tank, bent the spar backward and tried to rip the fuselage from the wing. The wing turned almost 90 deg to the original track but the fuselage was only about 60 deg. When everything stopped, I found myself twisted sideways in what was left of my seat with both feet stuck through the right side of the fuselage. The right tank burst from the tree impact and the left tank was punctured by the fuselage/wing interaction. Fuel was everywhere - I was completely soaked and there was a pool of gasoline on the floor (or whatever structure was there) in front of me. My belt was jammed so tight in my gut I had trouble releasing the latch. I also had some trouble extracting my feet from the jagged opening. One of the residents helped pull me out and into her home to await the Paramedics. I crawled out under the left canopy rail (fuselage side was ripped wide open) and slid down the wing.

Random thoughts: The whole affair from decision point to extraction was less than 1 minute. I called "Mayday,Mayday,Mayday" as I turned toward the trailer park and I remember chuckling when the tower said "Try to make it to the runway". Yeah, right! I hope he felt stupid after he said it. There was no fire (thank God) but I don't know why not. The fuel spill killed the grass in a 50 foot area. No one was injured on the ground and precious little physical damage was done. This was helped by it being a weekday afternoon with no cars at home and few kids playing. I traveled 100-125 feet from touchdown/impact to stop. It wasn't slow and it wasn't pretty. I was worried about maintaining speed during the turn and avoiding a stall/spin. The descent rate was enormous with a windmilling CS prop. The arrival was more like a splat-skid. In hindsight it probably helped dissipate energy. No one picked up my ELT signal - if it triggered it had no antenna, it was installed on the seat back bulkhead and the cable was severed. Seemingly every piece of metal (except the VS) was bent. I had always wondered whether the fuselage would buckle ahead of the shoulder strap attach points - it did not and the shoulder straps did their job. I had a crotch strap and the lap belt stayed low to do it's job (Pacific Aero harnesses). I added protection to the glareshield (split reinforced fuel hose with foam pipe insulation over that). I can't tell if I hit it or not... but then that's the whole point. The canopy, that we all worry so much about cracking during installation, remained latched and undamaged... go figure! They picked up the wreckage this morning headed to Air Salvage of Dallas. I do not plan to buy the salvage. Go for it - there's a Navaid, EIS4000, SL15, GX65, SL30 w/CDI G/S & SL70.

Second guessing: I've had 2 days to reflect and can come up with a million woulda/coulda/shoulda's, particularly knowing the outcome of one branch of the decision tree. While I was in the hospital, my RV buddies were beating themselves up on what <they> should have done/said. Hindsight is wonderful! While there may have been "better" choices, I'm comfortable (and I'm the one that has to live with them) that I made "reasonable" choices given the circumstances at the time. Once I wound up in that coffin corner on base, I think I made the "best" choices coupled with a lot of luck. I never once thought of saving the aircraft. I traded my RV's life for mine - it was a good trade. But I'll miss her - for 30 minutes it was the best time of my life.

Several folks have asked about the cause of my engine stoppage. At this point I don't know but will keep you informed if and when I find out. This is what's happened so far. The FAA and NTSB did an on-scene investigation and then released the aircraft to me. The FAA said they would look at it further when it was removed. The insurance company did not want the plane moved until their adjuster saw it but since it was obviously totaled, they sent their preferred salvage company to retrieve it. They said the FAA would assign someone from Dallas to look at it and that they would investigate it as well (I presume to lay-off the damages).

I suspect that a non-fatal, one-of-a-kind accident is not going to get a lot of time if the cause isn't obvious. Hopefully I'm wrong but fatalities and exposure/volume seem to drive expenditures. With the plane in Dallas, and once they write me a check, there's not much I can do. So there's a possibility we may never know the cause. I'll keep you advised.

More pictures can be seen at:
http://groups.yahoo.com/group/HoustonRVBuilders/files/N6GY/

I posted some close-up pictures of my crash that I just got from friends. Please don't feel morbid viewing them. The amount of damage sustained, that still let me walk away, is testimony to a great design. That's one helluva airplane we're building. The pics are at:
http://groups.yahoo.com/group/HoustonRVBuilders/files/N6GY/

Oh yeah, I'll be building again. I was leery of discussing future flying with my wife after the emotional trauma she went through. But she actually brought it up the other night and suggested "we" build another. What a gal!

Thanks to all of you for your thoughts and messages. You can really appreciate how much the RV community is an extended family when something like this occurs.

The Phoenix Project began in 2002. I did decide to purchase the salvage but had to bid for it. I won with the next bidder within $500. Only the vertical stab and the canopy escaped the crash unscathed so the airframe rebuild was jump started with a partially completed kit - the wings and tail were done but the fuselage was still in the crates. The UPS radio stack went into a Navion I purchased with the insurance proceeds. The VS and canopy are both on the rebuild

The engine got a tear-down and rebuild. The FAA/NTSB never bothered to investigate the cause of the crash. My inspection of the engine and all other systems did not reveal any discrepancies. That supports the working theory of vapor lock as the cause. At the time of the original build, forward facing induction on parallel valve engines had to be modified by each builder. Sumps and intake tubes are now available commercially to convert from vertical to horizontal induction so my mods were replaced. My engine is now configured like an IO-360M1B but with an AFP servo. The Hartzell prop was obviously toast and has been replaced with a Whirlwind RV-200.

The rebuild has proceeded slowly because I have had the Navion to fly and maintain. Plus it's my second time around so nothing to prove. But it's almost ready. I've still got some FWF tinkering to do with sensors and plumbing. I also want to paint all the fiberglass before it flies and still have the cowling, wing tips and elevators to do. Then it's on to system tests, W&B and airworthiness.

I wrestled with calling the rebuild a repair of the original or registering it as a new aircraft. Ultimately I decided on new but with my same short N-number, N6GY. I was worried about my short N-number escaping into the wild. Fortunately the registration folks at OKC were extremely helpful and walked me through the process to deregister N6GY, reserve it back to me and then register the new kit s/n with that number. So the Phoenix is still registered as N6GY but is now s/n 24633.

It's been a long road but will be worth the wait.